A couple of you have commented that Silver seems over-priced, and we agree. If you go on GISE today, you will notice that Silver is listed at $1,202 per piece. This is over twice its in-game value. This gives us an opportunity to do a re-fresher on a component of put options called “strike pricing” and how they influence market prices.

Have you ever been in-game and a player joins your server, quickly pings the chat to buy something at an incredible amount, then hops to another server shortly thereafter to do the same thing again?  This behavior is an extreme but very obvious example of what strike pricing look like in Tradelands.

In the real world, strike pricing functions slightly different but the effect is the same. It’s the price at which a stock option is paid out using a method called a “put option.” The technical details of how this works aren’t important. Just know that the closer the market price is to the option strike price, the more valuable it becomes.

While different in Tradelands, a strike pricing technique has the same effect.  It occurs whenever a trader announces a price per piece in a public forum, such as the in-game chat. This announcement has the intention of buying something in large quantities with higher than normal prices. The buyer then purchases what someone will sell at that price, regardless of the volume, until they have no more money to spend (or in the case of a seller, when they have no more inventory available to sell).

For strike pricing to be noticeable (and successful) in moving the price for that item, there are three things that always need to be true.

1. The amount needs to be significant.

A successful strike price will be made with a significant volume in mind. At a minimum, it needs to be greater than what one single seller can provide. In the case of Silver, a buyer places a put option for 1,000 pieces (or 6,000 as shown in the graph above). This is a very common amount to request since it’s the number needed to use a cladifier. Silver’s current drop rate per pickaxe is 4.37%, which means it will take a casual miner 10+ weeks to fulfill this order by himself. In other words, multiple sellers are needed to fulfill this request.

2. The price difference needs to be significant.

A successful strike price will have a price per piece that is significantly higher or lower than any other offer on the market. F&BP usually recommends the minimum cutoff to be greater than 15% of the highest bid (or lowest if you are selling). Ideally, a trader should be targeting a different of 25% or greater. If you are under this amount, your pricing will likely be considered a “bulk price” and not taken seriously by players in-game. If your strike price isn’t good enough to be noticed, it will be quickly forgotten.

In Silver’s case, the buyer submitted a price that was +50% higher than anyone else. This caused anyone on the server with Silver to double check their inventory and see if they can immediately capitalize on the opportunity. This is the type of behavior a successful strike price will create.

3. The order needs to be filled in a short time frame.

If you meet the first two criteria, the third is to put a limit on the duration of the request. This limits the amount of time sellers have to scope out the market and stops people from using the opportunity to price gauge. In the case of Silver, the time frame is set to 48 hours. Coupled with announcements in both in-game and out-of-game chat systems, the buyer is able to accept orders quickly after the price is accepted. One important thing is to stick with the time frame you provide, otherwise sellers will accept only after it is convenient for them and you will lose momentum.

If you understood all of that, then you might understand what’s happening to Silver. A couple of high value strike prices raised the overall value of Silver. Once those were removed from the market, the value remains in its elevated position. This is through a phenomenon known as Prospective Value. The chart below shows the three phases of the Prospective Value process once a strike price is successful.

As you can see, when the strike price was placed, players first double checked that someone wasn’t willing to pay more. Then, when it was clear that the offer was the best on the market, multiple sellers who had significant inventory started fulfilling the order. Then, like a series of waves, the sellers replenished their own inventory by purchasing Silver from other sellers but at a lower cost than what they just sold. This causes a ripple effect that trickles down to small-time traders who can also make a profit from this phenomenon as well. If enough volume was traded during this timeframe, the price point will slowly return to a new price point that is higher than its starting position.

Long-term, if no other put options are made, the price will eventually return to its actual price, or settle at a new price point that is slightly higher than when it started. Until then, people selling Silver are still making a profit as the strike pricing makes its way through the system. This is what you are seeing in the slow decline of Silver’s index price today. 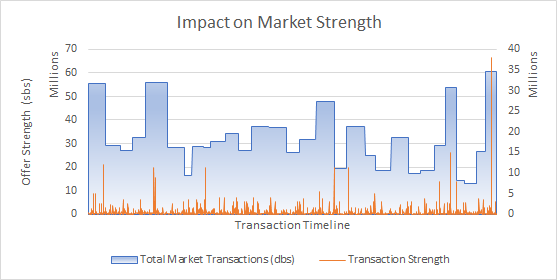 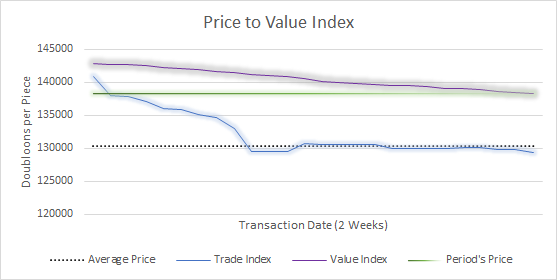 August represents the last month of the summer in Tradelands world. Now comes an expected decline in economic activity that will occur over the next few months. We already see a 40% reduction in market activity compared to last month…